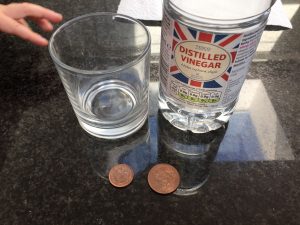 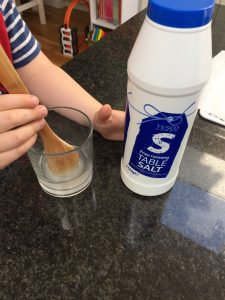 This simple experiment was great fun to do with my preschooler. I simply took a couple of copper coins, a glass jar, some vinegar and some salt. We put some vinegar in the glass and then stirred in some salt. 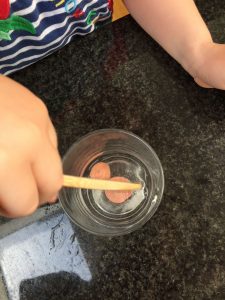 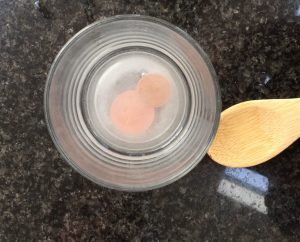 We mixed the salt into the vinegar solution and then put in the coppers. We left them for about 10/20 seconds and then took them out. And wow, the shininess difference was huge! They were pretty dull and dirty before they went into the solution, and sparkly when they came out!

After they came out, I then rinsed the 1p in water and left the 2p covered in vinegar…and we kept them on a piece of kitchen towel. About an hour later we took a look. The 1p was still relatively shiny, but the 2p had started to get ‘dirty’ looking again. And there was a green-blue oxide residue on the kitchen towel.

The science behind it…

The coins are made from copper and become dull because of copper oxide collecting on the surface. The vinegar and salt react together to remove the copper oxide and leave the coins looking shiny again. For the coin that is left with vinegar on, a chemical called malachite forms on them which produces the green-blue residue.