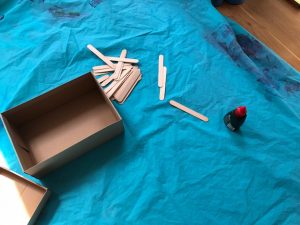 The activity was originally envisaged to involve Daddy and our eldest, but the youngest hovered around proceedings and decided that this was much more interesting that what he had been doing…

Our first order of business was to build a suitable deck for our Sydney Harbour Bridge model to facilitate the transit of toyl cars across the finished structure.  The concept consisted of a strip deck cut out of the shoebox and glued onto craft stick girders on either side.  Eldest was encouraged to participate with the promise of using “Daddy’s Glue” for this activity (B&Q brand wood glue).  With a little assistance, he was able to grasp the concept of applying glue in a (more or less) straight line, attaching the next craft stick and attaching a peg to hold the assembly in place. 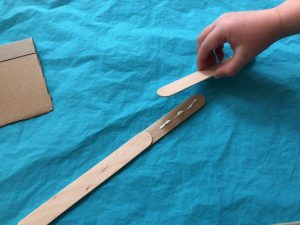 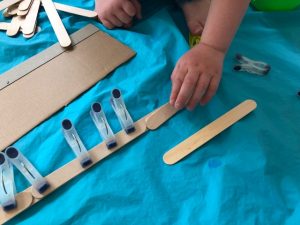 Daddy periodically tapped the growing assembly on the floor to ensure it remained reasonably straight.  Fabrication accuracy was only marginally hampered by youngest, who was eventually mollified through the sacrifice of some craft sticks…

The completed girders each consisted of 9 overlapping craft sticks, 5 on the inside and 4 on the outside.  Once the glue had dried on the craft sticks, we folded up the sides of the cardboard deck pieces (two of, due to the dimensions of the shoebox) and glued the girders to the folded sides.  Pegs were applied librally to hold everything in place while the glue set.  Together, the deck pieces were the length of four craft sticks – the remaining half craftstick at each end stuck out beyond the deck to enable us to fix into the pillars. 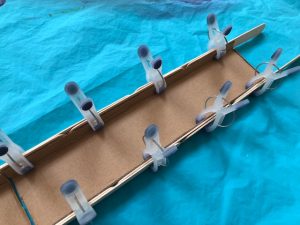 The bridge pillars are an important part of the structure (in both the real Sydney Harbour Bridge and in our model).  We made use of the body of the shoebox and its lid for this purpose, cutting two strips and then bending them round into a rectangle of appropriate proportions.  Ideally this needs to be around as long as the deck is wide and twice the width of the deck.  Fold into a rectantangle, glue and peg.  Easier if a small person isn’t keeping himself busy stealing the pegs… 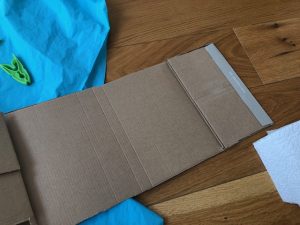 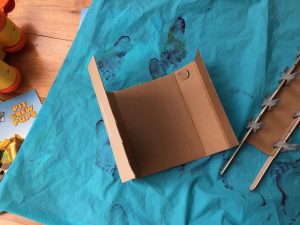 We cut slots down the long faces of the pillars to match the width of the deck.  Check that the slots are the same length on all four faces – this took a little fiddling to get right.  Once you have these cut, fold over the resulting flaps in the same direction and glue together. 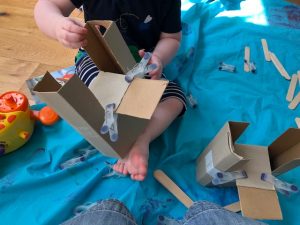 Now we can glue the deck onto the bridge, and it starts to look like we’re getting somewhere…

At somewhere around this point the munchkins lost interest.  In hindsight if you want to maintain interest throughout you will probably need to break it into a number of separate activites, or use older children with slightly longer attention spans (greater than 10 minutes anyway).  We have a deadline however, so Daddy ploughed on alone…

The lower chord was formed from a faceted arch of craft sticks, glued just at the ends this time.  I temporarily pinned the craft sticks with pegs and then glued them once I was happy with the shape.  The key point is to make sure that the span of the arch is slightly longer than the free length of the deck between pillars such that the finished chord can slot into the base of the pillars. 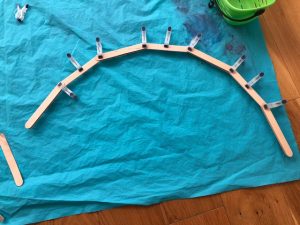 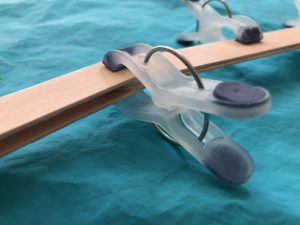 Once you have one lower arch chord you are happy with, make the other identical by assembling on top of the first one (just be careful not to accidently glue them together…)

The upper arch chords needs to have the same span as the lower chords, but have a lower rise (I went with about 2/3 of the height for the model).  Use the same approach as for the lower chord to get the shape looking reasonable – note that while the lower chord is a circular profile, the upper chord has straigher ends with the curvature in the middle. 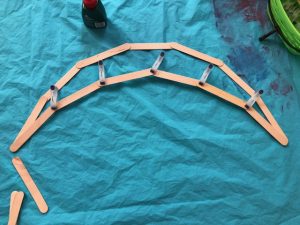 As before, duplicate by building the second upper chord on top of the first.

Once you have the four arch chords (two upper and two lower), you can assemble onto the deck and pillars from earlier.  You will need to cut slots in the base of the pillars to receive the lower chords, aligned to the edges of the deck and wide enough to accept a craft stick.  Once you have done this, slot the lower chords in and glue to both the pillars and the side of the deck. 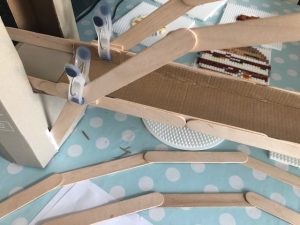 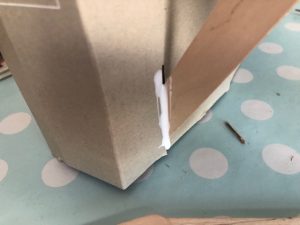 Unless you are better than me at alignment, you may end up needing some packing to make everything line up.  I just cut up some craft sticks with the kitchen scissors (sorry Mummy) and glued them in… 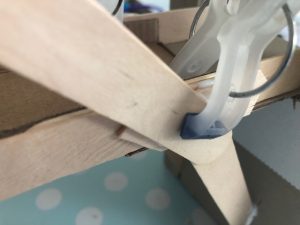 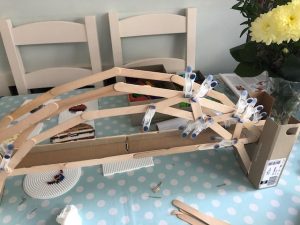 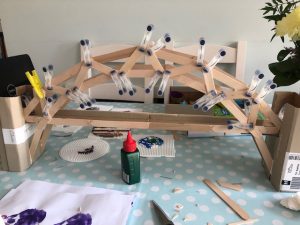 Then the hangers could be glued in; these were just made from cardboard strips cut from the remnant of the shoebox and trimmed to the appropriate length. 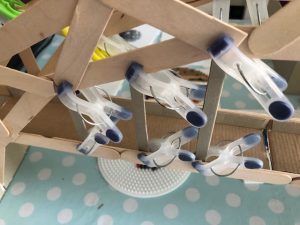 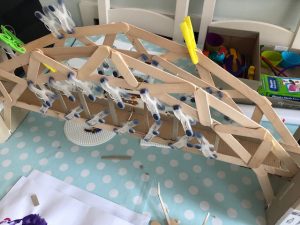 The final step is to place stringers between the arches to make the whole thing a little more robust.  Not strictly prototypical, but does the job.  I cut sections of craft stick to the appropriate length and trimmed the corners to protect little fingers. 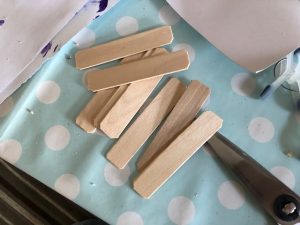 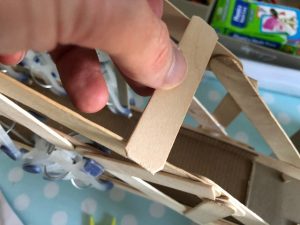 And there we go; the Sydney Harbour Bridge! 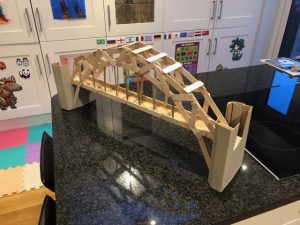 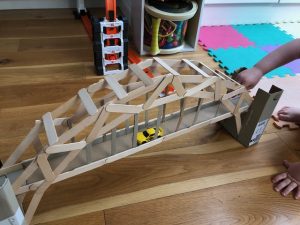 Our eldest thought that this was basically the best thing ever, and had a great time running his cars, transformers, round blocks etc through it.  The construction also proved to be surprising robust, surviving littlest angel belting eldest over the head with it without any visible damage (to it or eldest before you worry).

Fun crafting (at least until they lost interest), a great new toy, and could reasonably be used as an introduction to engineering principals for older children.  Let us know what you think!