The Dead Sea is famous for being incredibly salty and being easy to float in as a result. So I thought we would conduct our very own Dead Sea salt experiment. 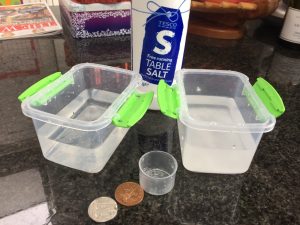 For this, I took two identical small food containers, some salt, a little flat-bottomed medicine dispenser (found in a kid’s medicine packet) and a couple of coins. Into one container, I put just water. Into the other container, I put an equal amount of water (this time slightly warm to aid dissolving) and as much salt as I could get to dissolve – plus a little more to make sure. I then tested out what I could put into the medicine dispenser that would sink in the water, but float in the salt solution. 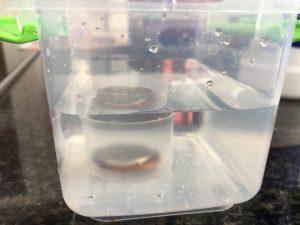 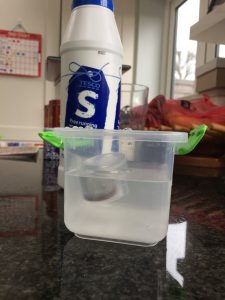 Here you can see that putting a 2p and a 10p in was the right balance for me. I did up to this step without my preschooler present. 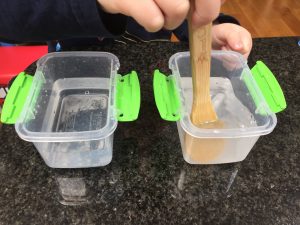 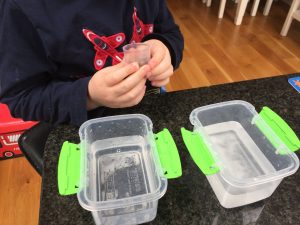 Enter my preschooler. I explained about the two different solutions, and got him to hypothesise over what might happen. He is so into the Bella and Harry book Let’s visit Jerusalem – see my post book for Israel week – that he guessed straight away that more would float in the salt solution. He was impressed nonetheless! 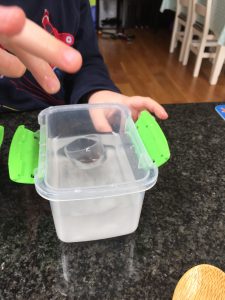 Next we tested what our limiting weight would be. We had some plastic coins from a toy till, which didn’t weigh very much individually and could be used to incrementally increase the weight. We found our limit – an extra four plastic coins would still float in the salt solution (and sink in the water), but five ceased to float. 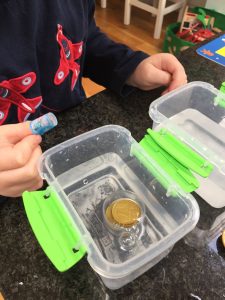 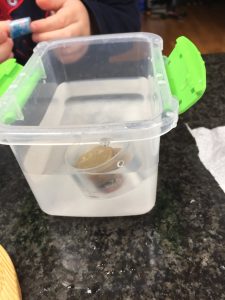 It was such a good experiment for getting my son to predict outcomes and think about some simple science.

A little about the science –

So why does salt enhance floatation? The salt dissolved in the water increases the density of the water (in crude terms, how heavy it is). This means it has greater capacity to support heavier objects. The denser the liquid, the more will float in it.