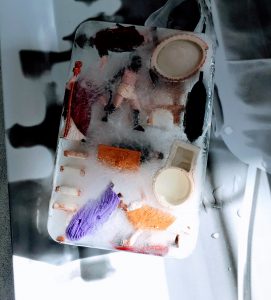 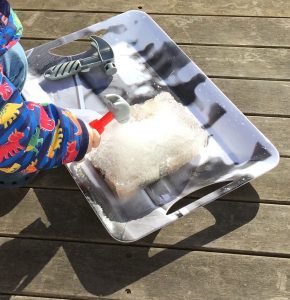 Just like for Egypt week (see post), I ordered a tube of Ancient Roman people and buildings and set to making a sensory excavation activity. We did the rice excavation, as per Egypt week, but I wanted to try something a bit different that would get my son’s scientific brain itching. So I took a large foodsaver, filled it with water and stuck the (plastic!) figures etc. inside and then put it in the freezer to freeze. When the time came, I presented this to my son on a tray and asked him how he was going to get the objects out. He tried a toy hammer, but concluded that it would take him a while given how big the ice block was. He then asked for some salt, and tried to melt the ice away with that. It was a great idea! But it only took away the surface (I didn’t want to give him too much as I wanted him to keep thinking). He then suggested we put it outside for a bit – thankfully it was a sunny day – and get the sun to melt the ice. Once it had started to thaw, a mixture of a toy hammer and some more salt enabled him to excavate the objects. 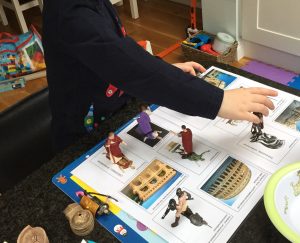 Once he had got them all out, he had a go at matching them to a sheet I had prepared – see Crib sheet for ancient rome. This gave us a chance to talk through some key people/places from Ancient Rome.

Here is a link to the tube of Ancient Roman people/places figurines. Please note that this is an affiliate link, which means that if you purchase the item here I get a small commission at no cost to you.